Richard Albert Loeb was born on June 11th, 1905 to Anna and Albert Loeb, a wealthy German Jewish family living in Chicago. He was the third of four sons, and arguably the most precocious. Loeb, usually called “Dick” or “Dickie” by his friends and family, was weak for the beginning of his childhood, catching many diseases such as mumps, measles and whooping-cough and thus stayed indoors much of the time. By the time he was nine he began to grow strong and became more active, showing an increased interest in sports and outdoor activities like sailing and fishing. Tennis was his favorite sport, and he played frequently with friends, family and neighbors in the courts on the Loeb grounds. As a child he was said to be quiet, courteous and obedient, especially around his family.

When he was four years old his first and only governess, a woman named Anna Struthers, was hired by the family. About a week into her employment he locked her in the attic in an attempt to get rid of her. Though he chafed under her authority in the beginning, he would soon grow to love and respect her.

Anna rather dominated his life for the ten years he was in her care. She tutored Loeb for three years privately until he entered the third grade at seven years old. After this, she continued tutoring him along with his assigned classwork. She read him classics and encouraged him to excel academically, dampening his interest in playing with other children and creating a barrier between him and the rest of his family. She could be jealous and protective of her charge and would sympathetically agree when Loeb complained to her of feeling left out and mistreated by his older brothers. She was able to encourage these feelings that his brothers didn’t like him, and even that his parents preferred his brothers over him. This would push him to strive for the scholastic honors that got him the recognition and praise he felt was lacking otherwise, and created a way for him to distinguish himself from his more athletically inclined older siblings.

Loeb revered Struthers, but he became wary of her punishments, which could be quick and severe, though they were never physical. He started to lie and keep things from her at an early age to avoid these kinds of punishment as well as her disappointment. He would sneak detective magazines in bed after dark, which he knew she didn’t approve of, steal small items from shops and as early as eleven he began to dream of one day being a great criminal.

In court, the case was made by the defense that the characters Loeb used to play-act as a child were early examples his commitment to playing characters and his inability to tell reality from fantasy. Pictures were shown of him as a child in various costumes, as well as pictures of him apparently telling stories to his teddy bear. It was said that Loeb, even as a teenager, would begin to daydream while lying in bed by starting off with the phrase: “And now teddy…” as though his fantasies were bedtime stories he was still telling his teddy bear. 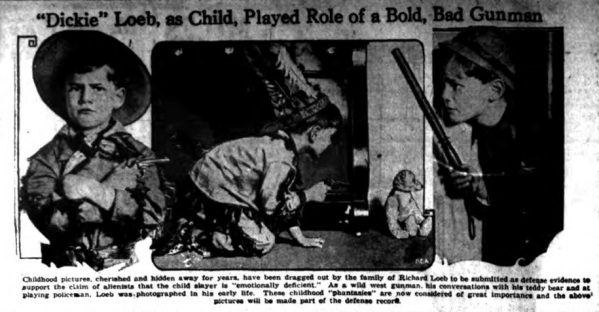 There were a number of different fantasies he indulged in, which sometimes were strictly in his head, as when he laid in bed and imagined himself being abused behind jail bars but revered as a master criminal, others he carried out in games and playacting in everyday life. Starting young, he would imagine himself a detective, and would follow people around town to try to observe their criminal behaviors. At other times he would take on the role of the criminal and walk down the street giving hand signals to his imaginary gang, instructing them to rob certain houses or to warn them of danger. He continued stealing small items from shops and friends, feeling no remorse, though he did feel shame when he was caught because he had not been skillful enough to evade detection.

As he was an adept liar, a dedicated student and an outgoing, polite young man, he was never suspected by his family and friends to be anything other than he seemed. Loeb was especially delighted when his father’s business partner and good friend, Julius Rosenwald, sent a magazine Loeb had created with his friends to Teddy Roosevelt, with a letter explaining who the remarkable ten-year-old editor was. Teddy sent back a personal reply, stating: “It does me good to see young men of your stamp growing up in this country.” Roosevelt died in 1919, before he could see how inaccurate his predictions for this boy’s bright future would be.